Heading up to Rustic & the Antelope Mash-up.

Still playing catch-up on the blog but I'm almost current! This is just prior to Memorial Day weekend.

After our stay in Cortez we got on the road to points north on our way "home" to Rustic, CO. We planned a hit 'n run overnight stop in Glenwood Springs at the Hanging Lake Inn, an unassuming old-style inn we've stayed at before. But first, a beautiful drive up Hwy 145 towards Telluride then up through the Grand Mesa area on Hwy 65, the Grand Mesa Scenic Hwy. The scenery in the Grand Mesa area started out  flattish, and dry, with rock formations and cliffs.

Up on top of the Mesa there was lots of snow and small frozen lakes. Apparently it is a big cross country skiing attraction during winter. We'd made sandwiches before we left Cortez so we stopped to  picnic up on top.

It was a great day for driving and the scenery didn't disappoint. Once we made it into Glenwood and got settled we ordered a delivery pizza and called it a day.

The thought was to make it to 'Rocky' on Thursday mid-day to assess her condition after 8 months away. Then, hopefully spend the night assuming all was well (no critters), and do a big shop-up on Friday prior to Memorial Day weekend.

When we left Glenwood Springs, the head honcho decided our route should be scenic (of course, it's his M.O. and I'm glad of it) so we took 70E a short ways, then headed north on 131 then east again until we got on 125 which is a long straight shot from Granby up to Walden, where we would catch 14 up over the Continental Divide then on to Rustic, tada.

Definitely some great scenery around and about. Talk about the lazy-man's way of sightseeing!


So cool how when you come up towards Walden it's wide open spaces, grasslands, ranches  and part of it is even a wildlife sanctuary. So we're tooling along about 30 miles south of Walden, it's noon'ish and we're starting to get excited to be (finally) getting to Rustic, when out of nowhere, an antelope leaps out right in front of our car - BAM! No way of avoiding it whatsoever - BUMMER for all concerned.

Luckily, the lady in the car behind us stopped to make sure we were OK, (we were ,but the antelope wasn't 😞) and after some discussion she offered to call the sheriff once she had made it back into cell phone range. What a lifesaver that was, as we wanted to get an official incident report for insurance purposes.

We were sure thankful that it was a smallish doe rather than a big buck and that nobody was hurt. It was so strange to get back in, crank up and head off up the road like nothing had happened. Great scenery and all. The area between Walden and the Cameron Peak Pass (continental divide) sure is pretty. 360° of gorgeous mountains (with the snow lit up in the mid-day sun). 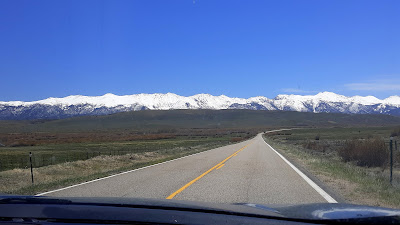 We made it up to Rustic, the rig was in great shape and we did get shopped-up. Now we just have to decide what to do about it all. Oh well, into every life a little rain must fall. (Isn't it funny how these little sayings come creeping back into our vocabulary at times like these?)

Thanks for stopping by and we'll see you next time.