Painting, Strawberries, and lunch with Nancy

It's been pretty busy around here working on painting, landscape stuff and food management.  The weather has flip-flopped between gorgeous, warm sunny spring days with a nice breeze and cool, dreary, grey days with rain. At least that rain is good for the landscape and water levels in the lakes.

So we all put our "painty-clothes" on and started the deck paint job with me cutting in around all the railing and up next to the house, and the head honcho rolling on the grit-laden Behr Deckover paint, which is a LOT harder to do. Thanks Honey!  It turned out very well and we're happy with it.

Additionally I put a fresh coat of paint on the staircase that runs from the deck down to the dock and we are planning to paint the dock during the next weather window. It's looking good around here!
While painting by the deck railings I spotted a freshwater monster in the lake, a huge grass carp, (I had to ask my neighbors, lol).  A few have been introduced into the lake from time to time to control weeds on the lake bottom.

This time of year is one of my favorite's because it's strawberry season - YAY!  Florida has some large growers just south of our area so we are blessed with fresh, affordable berries for a couple of months.  I usually keep a baggie of them all sliced & diced and ready to top a fruit bowl or some yoghurt. 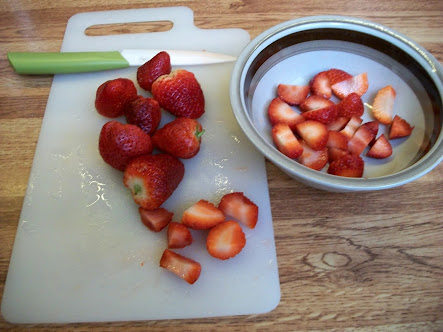 We have had a few nice sunrises lately. It seems I can rarely get my coffee juggled and get out back before all the beautiful colors are gone, but I try. 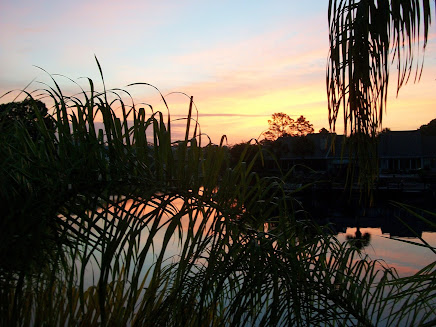 Another fun thing I did this week was to go to lunch with my friend Nancy. Again, we brown-bagged it to a riverside park and enjoyed a big gab-fest and the beautiful day and scenery. After lunch while heading back home I got to see a drawbridge opening for a sailboat. Love boats and water so much! 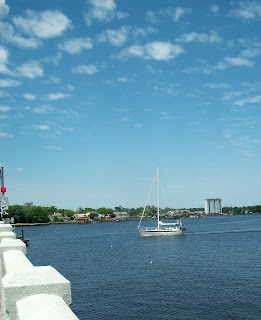 We're counting down the weeks before heading out west for a few months and that means cleaning out the freezer. We've been working our way through the "easy" stuff, but yesterday I tackled one of the more challenging; a big, ol' turkey thigh. I had moved it into the fridge a couple days before and it was ready to be ground.

I got out my trusty (and old! I've had it for 40 yrs 😄) Bosch Food Processor. Love the German precision and quality.  Years ago I always made our bread and did tons of other stuff with this Bosch, and it has really held up. The meat grinder attachment was the tool of the day.  In German it's called Fleischwolf, so I always call it that (with my best German accent, haha). With the partially-thawed thigh cut into 1.5" strips I started feeding it in and voila, beautiful ground turkey comes out!

Well, that about sums it up for the latest around here. Thanks for dropping by and hope you were entertained to some small degree!  😊

Back in December my handy husband and our neighbor re-planked our deck after checking the supporting structures for soundness, and we began the drying out period which would let the pressure-treated wood "air out" and evaporate any excess moisture or chemicals (I'm speculating here) prior to painting. Here's a shot or two.

So I was looking back through my annual re-cap posts on the svdreamtime.com site in an effort to see when last we painted the deck railings.  It turns out it was in 2013, but during the search I became amazed at how busy we were back then, how many friends we'd meet up with and how many places we travelled to. We were younger, obviously, but had tons going on, especially once we were half-timing it between the boat and the house.

In comparison, 2020 and this year (so far) have been so static for us, I'm afraid I've lost a step or two (physically and mentally) and will never be able to regain any "normal" oomph.  Yes, I get that we are getting older but I think I've developed a real LAZY streak.  Anyway, after painting the deck I will have to tackle the railings too.  We used Behr Marque paint and it really holds up, so hopefully we'll get another 8 yrs out of it!

I'll show a pic of my last puzzle, then close with a few flowers around the neighborhood and some pics from back in the days of our Caribbean travels.

A collage of shots from the French island called Marie Galante, sister island to Guadeloupe, both about halfway down the island chain.  We did a distillery tour with our good friends Shawn/Joe on 'Libertas'. This is around the town of Capesterre on the southeast corner of this round little island from 2011.

Hope you enjoyed the visit, see you next time.