The Same old Shoot-'em-up and the same old Rodeo

Here we are at the end of July and things are just rolling along as per usual. Not complaining mind you, not at all.

A few days ago we had some stormy weather coming in, followed by nearly dime-sized hail - holy smokes! Those sounded fierce pounding down on Rocky's roof.  Ed was outside enjoying some firepit action and took this pic of the start of the onslaught.  Later we saw some pics from Estes Park, which is south of us by roughly 50 miles as the crow flies, and they had so much hail they had to snowplow it off the streets/sidewalks. Ours only lasted 10 minutes or so, thank goodness.

Later that evening I strolled down to the river to see if it was running clear, which would mean "no drama" up canyon of us, and it was.
And I took a shot of these flowers that fill the whole length of the wall of the shower-house building - so pretty, the pic doesn't do it justice as the day was a bit cloudy. 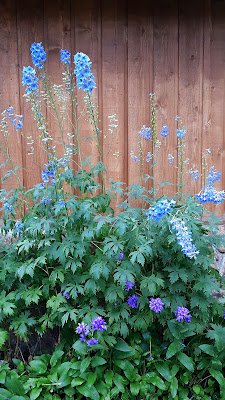 Yesterday Ed took the car just down the road to Dadd Gulch for a hike while I defrosted the fridge/freezer. He was the first one there so he was pretty continuously calling out "No Bear" just to clear his path up the gulch.  Well, when he started heading back down he ran across a mountain biking couple who said "There was a bear back there a ways" - haha (not!).  So, now, while hiking back to the car he was continuously calling out "NO BEAR!!!" But he didn't see a thing, whew.

Meanwhile, back at the ranch, I had just finished up the defrost and reload of the freezer when Ed suggested we head down to town, pick up our mail/packages and shop-up for the next couple of weeks. OK, let's hit it.

With all the town chores completed and with a firehouse sub in hand we headed up the canyon for a likely picnic spot whereupon we caught a group of rafters busily getting loaded onto rafts.

We found a likely picnic spot and while eating lunch we had a few close-up's of rafters coming through. It looked like they were getting a few last minute pointers for the run through the rapids.


Some sizable cottonwood trees grow alongside the river. Here's a shot of our resident tree-hugger with one of them. 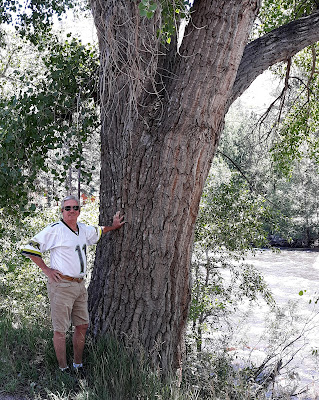 Back at Rocky, after breaking down the meats and getting them packaged up, I got all the meat, dairy, veggies and cold cuts loaded up and boy, was it packed pretty full! Ribs, pork chops, ground beef & Italian sausage, plus chicken, the freezer is full.
We shopped at King Sooper's (Kroger), which has an amazing variety of fruits/veggies, as opposed to Walmart, where we sometimes shop depending on what other household items we need. We feel so-o-o fortunate to be able to find and, for now, afford healthy, good food. Pray that that continues!
Well, I'll close with a sunset shot and a flower shot, and we'll see you the next time. 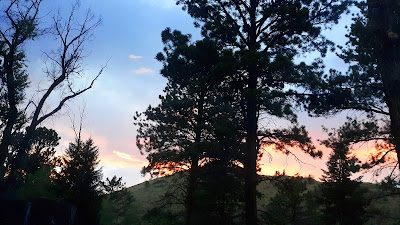 Thanks for visiting, leave a comment if you feel like it - we love from hearing from y'all.
at July 30, 2022 5 comments:

As the days pass by, the hotter weather is starting to build in a bit and the "monsoon" season rains have moved in as well.  After the mudslide up the canyon west of us last year, we have become wary when it rains for several hours/days in a row.  The grass and flowers are loving it but the day before yesterday mid-day, the river turned to mud and we wondered what that was all about.  We had had flash flood advisories around us but mostly to the south, closer to Rocky Mountain Nat'l park.  The river cleared up by the next morning - I didn't get a picture of it all muddied-up.

Coming home from town yesterday I snapped a couple shots through the car's window, and surprisingly, they turned out pretty well.

Our neighborhood cotton-tailed rabbit is back making the rounds nibbling here and there, but it seems to be the chipmunks that gleefully munch on my flowers. We also have a nesting pair of northern flickers with chicks in the dead tree next door. We can look out our dining nook window (and up) and see the activities to and from the nest.  Pretty cool!
On this past Wednesday it pretty much rained all day so I got inspired as I watched one of my favorite youtube channel videos by Chef John - Food Wishes where he was making a smothered chicken dish, and decided to do the same.  My pantry has a fairly limited supply of spices, for example no coriander, no tumeric, and no saffron, but I made my gravy using cumin seed, cumin, hawaij, smoked Joe Parker chili powder and some others besides and it was yummy. This next shot was taken at  an interim moment, after a hard sear on the chicken thighs (skin side down) and while I was getting the veggies into the gravy to soften and cook.
Check out this porkchop cooked on the Ninja Foodi Grill - so good!

We were able to tackle a pet project of mine, swapping out the loveseat for a recliner chair and bookshelf.  My back wasn't very happy sitting sideways on the loveseat all the time, and since we won't be having any sleepover guests we decided to give it away and replace it with another recliner - lots of seating choices that way.  Adding a small bookshelf offered the opportunity to square away the craft supplies and etc., to clear the floor under the table. So far so good.

The flowers are all doing great, mine as well as everyone elses, and the peonies by the laundry room have bloomed. Such a soft, pretty pink. 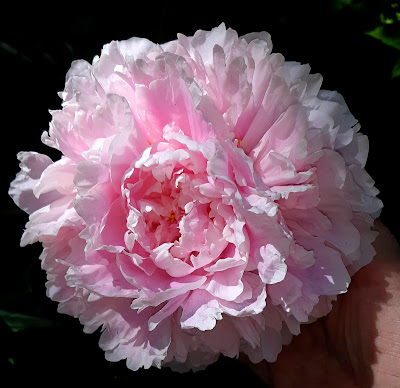 And a few other pretties for your pleasure. 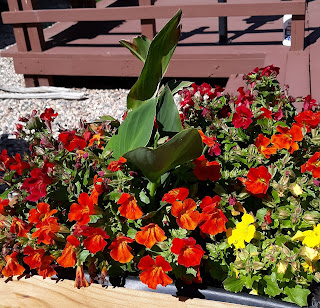