All summer long, while out in Colorado, I was dreaming of the Chicken Pot Pie I would make when we got back home, so as soon as we got home in October, I bought my Pillsbury pie crusts. But did I make the pie right away? Nope, I didn't get it done until yesterday - wha? 😮 Yep, somehow, I just didn't get around to it. Of course, it does involve a fair amount of time and effort, especially if you make your own chicken stock out of the dismembered chicken parts from the rotisserie chicken that you pulled apart.  In addition to all that, there was the washing and chopping of all the veggies plus sauteing them in butter and spices prior to making the gravy - whew! Took a bunch of time, but it was worth the efforts. Kind of amazed at how well the pie crusts held up in the fridge for 2+ months.

We've had some great looking full moon nights, and mornings. My neighbor, Debby, took this shot the other night during the Wolf Moon; the moon came up looking orange! Pretty unusual, I've seen yellow but never orange. I saw another shot like this from someone up in New Jersey and it looked identical, so unexpected. In doing some online investigation I saw several shots from around the world that had that bright orange coloration. I know oftentimes the sun/moon color is affected by volcanic ash, dust particles and even ice crystals in the atmosphere.

Here's a shot of the sun at mid-day we took while anchored out at the Dakity anchorage on Culebra, Puerto Rico back in 2015. It was directly over the boat and was so huge it took up the entire viewfinder. Ice crystals I believe. Really wild looking! Apocalypse anyone?!?
This week's weather has been dreary, somewhat rainy, and temps in the 50's for highs and mid+30's at night. Reminds me of growing up in Rochester, NY minus the snow of course.  This too shall pass.
To keep busy and to while away the time, I baked a new to us breakfast casserole. Usually we have Cornbread Strata every so often, (scrumptious!) but sadly, the freezer was bare. I decided to make my own Tater Tot version after watching Ree Drummond make hers. However, while at my Publix, much to my surprise, but not my husband's, the frozen potatoes section was nearly bare!? (Ed had warned me of an upcoming potato shortage). At Aldi I was able to snag a package of the rectangular hash browns and decided to use those instead.
So, on the bottom went the hash browns, then cooked breakfast sausage, a layer of shredded cheddar, next my veggies; lots of sauteed onions, mushrooms and fresh tomatoes (sans seeds and liquid), then the egg, hatch chilies, sour cream and cheese mixture, plus some more shredded cheese (lol). Refrigerated overnight and baked for breakfast the next morning - so good!
I keep complaining to Ed about how stuffed the freezer is, (first world problem fer sure!), but somehow it doesn't stop me from making/baking these big casseroles - Doh. Last week, I got a little desperate. I had a 5lb bag of yukon gold potatoes, bought while on sale, that had been around for a couple weeks already and I was worried about them getting soft on me. The answer, give some away - whew, and make a batch of scalloped potatoes. Hello freezer overload! 😊 (where is the "sheepish" emoji?)

On a "same but different" topic, I just LOVE a good mango! Lately the variety that is coming from Peru has been wonderful; sweet, delicious and most definitely not stringy.
Finally, I finished my latest puzzle and started a new one. Have to keep my puzzle pattern-finding muscles sharp, haha.
Well, thanks for stopping by for a visit. Not a terribly exciting lifestyle but I'm definitely not complaining. Luckily there are plenty of other blogs out there where people are traveling to satisfy your wanderlust. Until next time, bye for now.
at January 28, 2022 4 comments:

The days roll along and weather teeters between warm & sunny and chilly, damp and breezy, but all in all we'll take it! I still haven't managed to take down our Christmas doodads yet, but so what. It feels too early to put out the spring flower arrangements and door wreaths, so I'll let it ride a bit longer. About a week ago we celebrated our 47th wedding anniversary - whoa! Are we really that old? Oh well, time truly does fly by.

I received a beautiful flower arrangement and card, and in addition to his card, he also received a wonderful Steak dinner with all the trimmings. We split a huge T-bone and had baked potatoes, sauteed mushrooms & onions and fresh spinach.

Several mornings have offered some wonderful sunrises, and we are usually up and out enjoying the spectacle. 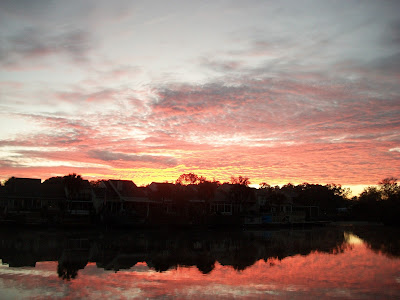 Since the first of the year, we have enjoyed a second, very satisfying dinner re-do of the Christmas dinner (turkey, dressing, rice, gravy and roasted veg), and the New Year's Day dinner (ham, black-eyed peas, rice, collards and cornbread), and we are in "hog heaven" over it. Eating well is one of our greatest enjoyments! (look at our waistlines, duh).

I've been indulging my passion for the arts by trying my hand at jewelry making, wire wrapping to be more precise.  Oh, and making "fun" rings too.  As someone said, "I went to the University of Youtube" to learn how to do it, haha. I have several styles to try out: ornate spiral weavings like the one below, or spare, sleek designs. It's fun so far. Purely recreational.

This morning I tackled making a nice, big batch of sourdough french toast for the freezer. When I want a lazy breakfast, it's scrambled eggs, fruit and french toast. Easy and delicious.

And finally, I just wanted to say how blessed we are to be healthy, happy and well-fed. Thank God the supply chain hasn't gone in the ditch (yet) and we can still have a wonderful selection of fresh fruits and veggies.

Thanks for stopping by for a quick peruse at the blog. Enjoy your day!

Things are chugging along and a new toy

Well here we are well into 2022 and things are just chugging along as per usual - thank goodness. We're all healthy, we've got good food to eat and the weather is just about perfect. So far we haven't done much in the way of dismantling Christmas. We're still enjoying the cheerful twinkle lights of our trees, but yesterday our outside lights came down until next year.

On New Year's Day we had a traditional dinner of baked ham, black-eyed peas, collards, rice and cornbread and boy, was it great. A large meal like this is best served mid-day (2pm-ish) we think and gives us plenty of time to digest while putting away leftovers, cleaning up the kitchen and dishes. I tried to do a bit of decorating to make the table more New Year's and less Christmas.

The ham came out great and it's such a treat to cook one and have several packages of ham in the freezer for good meals in the future.

Ok, what is this new toy you were talking about?  A Colorado brand 9' Pontoon boat for rowing around on our lake. Wow! It went together quite easily and we'll all look forward to getting a little fresh air and exercise on our 9 acre lake. It's amazing how different it looks from water level as opposed to our deck level. 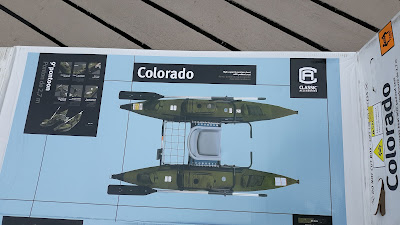 Still baking cookies, the lemon/ginger/almond ones were very popular around here, so I made another batch of them. So good with a cup of hot tea after dinner. You use a lemon cake mix as the base and go from there. Tasty to say the least.
Another funny thing from my kitchen - I've always loved the longevity of Roma tomatoes, it almost seems like they can hang-out on the counter just pleasantly ripening up, but then you glance at it and see this - LOL!
at January 07, 2022 6 comments:

Email ThisBlogThis!Share to TwitterShare to FacebookShare to Pinterest
Labels: baked ham, lemon ginger cookies, pontoon boat
Newer Posts Older Posts Home
Subscribe to: Posts (Atom)
After moving to a home in Florida and selling our sailboat 'Dreamtime' we bought a Keystone Cougar 26RLS 5th wheel and parked it out in Colorado at 7200' for a cooler summer season. We try to split our time between the 2 over the course of the year.