Besides the daily "scope-out" of the morning temp's showing a downtrend, the flowers and foliage show us that change is coming. The day before yesterday it was 31° first thing and never rose above the low 50's with thick fog blanketing the canyon. So different from the blue, BLUE skies we normally see.  The electric blanket is on the bed and the tiny electric heater plugged in and ready to turn on if needed overnight.

We had a relatively sedate Labor Day weekend in our park, so dead one day then full of happy campers for the next couple of days and back to just a few "regulars" spread out around the park.

We like it both ways just fine, people (and dog) watching and things happening in the pavillion/playground area when it's busy, and bird (and critter) watching when it's quiet.  This time of year the bears are on the prowl trying to get beefed-up for their upcoming hibernation. We have had a momma bear and her cub(s) coming around in search of good eats, however, everyone is pretty disciplined in food & garbage management and there's not much to be had.  The momma knows how to open unlocked car doors, so we had several people whose vehicles were investigated, and one morning the momma and her cub were "treed" up a large pine by the bathhouse. Of course, like you see everywhere, some people don't know how to give wildlife some space, but we had no dramas, thank goodness.
The above video was taken by a "workamper" who's working here for the season. It's also the 1st vid I've tried to post, hopefully it works.
I spied a downy(I think) woodpecker on a cottonwood tree up near the laundry room and tried to get a decent picture of it.

While up near the laundry I spied this (tired) tire cover I found amusing. 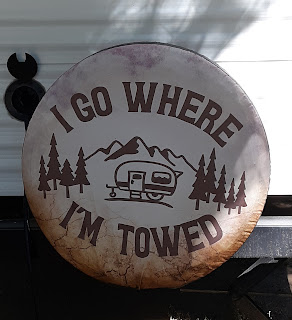 Let's not forget these guys running around, wild turkeys. They were very skittish and it was hard to get a good pic, but it looked like a him/her.

I mentioned the flowers showing some signs of the upcoming end of the season, however this lady's planter box has done beautifully over the course of the past few months, thanks in large part to her diligent applications of Miracle Grow I suspect.

On the cooking front, I've discovered a "new to me" wonderful chipotle product that I don't believe I've seen back east, so I've stocked up on some to take back home. It's a sauce, so it's been pureed, no hassles, so good and so easy to use. 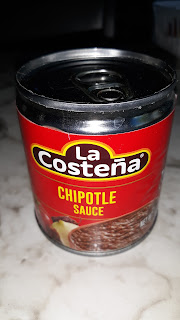 The combination of chipotle, ancho and guajillo chilies makes for a nicely Tex-Mex flavor with a moderately spicy heat. So wonderful added in smallish quantities to stews, chilies and the like. Pour some over enchiladas to tune them up - YAY! When I get home I will fill an ice tray up with this sauce and have handy ice cubes on hand to toss in to my dishes.

Finally, I will share this cartoon, which is often the case when coming up/down our canyon on the weekends, albeit never that much traffic! Haha. See you the next time, thanks for stopping by.