Finally stepped foot into Colorado, down south into the Spanish Peaks.

I'm still playing catch-up on the blog but these events takes place around May 13th.

After leaving Arkansas we made a quick boogie through Oklahoma stopping about 2/3rds way for the night. The next day we finished up driving through Oklahoma and entered Colorado from the Southeastern corner at Trinidad. From there it was a fairly short jaunt up into the 8400' town of Cuchara, situated in between the Sangre de Cristo mountains and the nearby Spanish Peaks. Wow, what a beautiful area.  We rented a "cabin" right on the Cuchara River and were treated to a very nice house offering tons of peace and quiet, plus full amenities. This was a direct booking through Cuchara Cabins & Condos.  This trip is a mix of direct bookings and Airbnb bookings and we haven't been disappointed in any of our choices.

After getting settled we went out for a short tour along the Highway of Legends and over the nearly 10,000' Cuchara Pass before dinner. 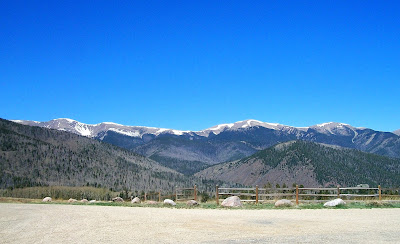 Some great views to be had, and a fair share of snow too.
While driving up to Cuchara we passed by this lovely lake and had to stop for a leg-stretcher. So pretty.
The next day we packed some sandwiches and headed out for a hike. We found a likely road into the San Isabel Nat'l Forest which showed a 1/2 mile+ easy (handicapped accessible) trail to a scenic overlook. Sounds good right? Just my speed we thought, what with my foot problems and all. Well, it was a heavily-wooded trail with some big patches of snow to traverse, but it was fun! The diversity of the pine trees was incredible, some were tall, and had slim limbs with short sparse needles and some were fat-limbed with super bushy needles. I rubbed my hands over the needles and then smelled them - memory-blasted with childhood memories of live pines at Christmastime - wonderful! So long since I'd smelled that. The whole forest smelled that way, but super fresh too because of the snow.

So we walk the 1/2 mile and there's a sign that points left and says "Scenic Overlook 1/2 mile" WTH?!? Nope, no way am I walking another 1/2 mile then a mile back, no can do.  Ed says "no problem", and scouted ahead and found a perfectly situated hillside with a great panoramic view - YAY! (Wouldn't you know it, I can't find a picture of it, lol). We use both phones and my trusty Kodak pocket camera for photo op's, so there's usually scads of shots to choose from, too many really, but not this time.
These booked stays of ours are 2 nights in length, so we have to split the time between trying to do too much and being lazy. We did some other auto-touring but also relaxed and rested-up too.
Thanks for checking in, the next post will be up soon, so check back.