Our days have been rolling along like clockwork. The temp's are drifting lower and we have wonderfully crisp, clean air with blue skies most days. We have had occasion to eat out on the deck - generally it's breakfast, as it's too chilly and dark at dinnertime.

But some days it's too chilly in the morning (this AM it was 49°), and we retreat to the Florida Room.

Last year I was able to round up boneless, skinless turkey thighs, (our favorite part of the bird), but this year the grocery stores were complaining that they were only receiving necks and wings from the meat processors, who stated that they have been short staffed due to covid - bummer.

As a result, I waited until Monday of Thanksgiving week to decide on Plan B. By the time I got to the grocery store all they had left were 18+ lb. frozen turkeys for wa-a-ay more $$'s than I wanted to spend. Besides which, much too big for 2 people! Instead I picked up a pair of Cornish hens and endeavored to do them proud.

I had never done a "dry brine" before but decided to give it a shot. The day before baking, I washed and patted dry the birds, placed on a small baking sheet, then piled on the brine (including the cavity). The brine was 1/4C each kosher salt and brown sugar, with a heaping tablespoon each black pepper and garlic powder. I then covered the birds with a layer of plastic wrap and refrigerated them overnight. In the morning I rinsed them thoroughly, and again patted dry, then let them rest, covered, in the fridge for about 45 minutes.  I used some of my homemade garlic & herb compound butter under the skin of the breasts and slathered it all over the rest of the birds. Dusted with paprika, salt and pepper and baked @425° for 55 minutes. Oh wow, they really turned out great! The flesh was nicely seasoned and very moist. A definite winner.

We split one bird and paired it with cornbread dressing, rice & gravy and roasted carrots, plus cranberry sauce, the relish plate and a nice Pinot Grigio wine. AAAHH... stuffed and replete for sure. 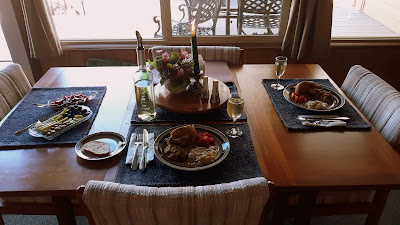 To any readers out there that get bored with food-related posts, sorry, but that's the way it goes. We're not travelling right now and not much else is going on, so "foodie-ism" is the way it is.

I caught a modest yet pretty sunrise a day or two later. It hit a cloud layer and fizzled out pretty quickly.

And lastly, I've been playing around with my dehydrator from many, many years ago. Just checking it out and trying to reduce the carrot load from my vegetable drawer in the fridge. We'll see whether or not it's worth it.
I thought I'd round things out with a shot from this time in 2012. We had a bigger crowd than now, for sure, and as usual, my wonderful mother-in-law hosted it at her house. We sure miss her! 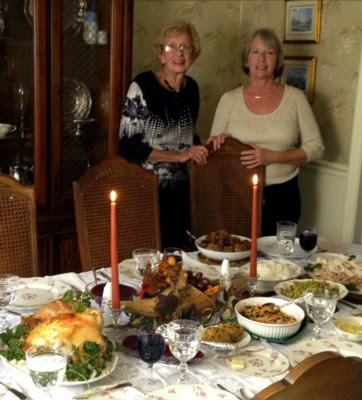 Thanks for checking in with us, and feel free to leave a comment!
at November 29, 2021