We have finally started having some pleasantly cool days which means open windows (and doors) all around.  The Boss has been spending his days tinkering around in the garage doing clean-up, and organizing all the many bit's and bob's we seem to have accumulated, lol. After living onboard in the Eastern Caribbean for all those years it's tough to throw anything out, you're bound to need it the very next day or week!

One of our neighbors is moving and some loose shelving ended up out front, fair game for the DIY'er in the house and now installed, we've added a few more square ft of storage space in the garage closets.

On the neighborhood front, one of our neighborhood "movers & shakers" organized a clean-up day aimed at picking up any yard debris, sticks, palm tree "boots" and general trash that might be keeping our little neighborhood from looking it's best as we head into holiday season. Several people showed up and within a couple of hours we had a couple of pickup truck loads of yard debris headed to the landfill for composting. It was a great day for it, overcast and high 60's at the start.

Here's another sunset shot to amaze you, taken by an across-the-lake neighbor. We are so fortunate to have water in our views.
As I mentioned in the previous posts cooking and good food make the world go around and in the spirit of that sentiment, I baked up the sausage, cabbage and veggie quiche-like casserole. It is covered in detail on the Recipe page on svdreamtime.com but here is a shot of the ingredients ready to be assembled.

And finally, to finish things off a shot of the last 2 puzzles I worked on. They were both fun and colorful. 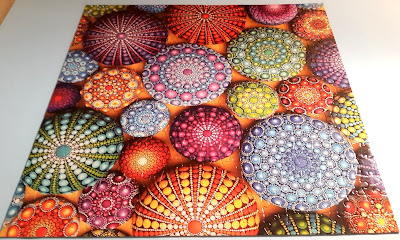 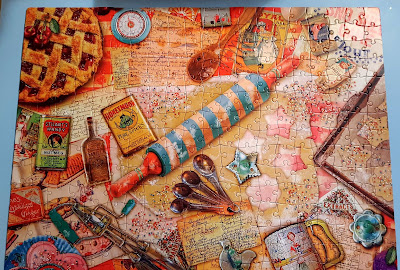 Thanks a bunch for visiting, leave a comment if you feel like it. Bye for now.
at October 30, 2021