I always figure that by the first of March we are halfway to summer, although the weather temps are soaring like it's summer already some days. My sister, who lives in south central Florida, was saying how refreshing to have a 61° morning - a cold snap as it were, as she has been having mid to high 80's already. I think "robbed of springtime" is how she put it. Up here it's been about the same - 80's much of the time.  It does give the boss a chance to get out on the lake to row and enjoy the day. 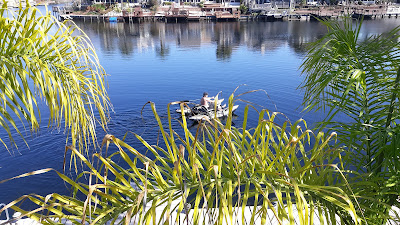 We have a pair of swans on our lake that stay busy with patrolling the lake to chase off the geese and Muscovy ducks that try to hang-out. I'm all in favor as the geese/ducks can be messy.

The other afternoon our neighbor had a gorgeous heron on his deck railing. Nice to observe one in fairly close proximity.

After cooking that ham a couple of weeks ago I got to craving collards and cornbread, so nothing would do but to get a big bunch from Winn-Dixie. They tend to have a sale on them fairly often and the bunches are very generous. I get at least 6 supper time servings for the 2 of us out of a bunch, so I put them up in freezer bags and stash the extras in the freezer.
Also, I'm finally motivated to losing some the extra pounds I've put on during the pandemic, so in addition to cutting out snacking in between meals I've been eating my usual breakfast and having just homemade vegetable soup for lunch. 2 batches so far, and very enjoyable. The batch we're eating now has a small amount of ham for flavor, and uses homemade chicken & ham stock plus tomatoes, potatoes, carrots, celery, zucchini, onion, hominy, peas and corn. Much better than coldcuts, cheese and crackers.
Let's all b*tch and moan about food prices, specifically meat. I'm always trying to buy on sale or as a "bogo" (buy one, get one). This week W/D had thick cut center loin pork chops as a bogo, and these are delicious treated like a steak and cooked on the Ninja Foodie. Ed and I split one and usually end up with a nice bone portion to nibble on the next day. Lucky for us we don't eat a large portion of meat at dinner.
Last weekend after reading a few blogs that exhibited their delicious looking burgers, we decided to have a burger and fries for a late lunch.  So good and so filling. We enjoyed them out on the deck as the weather was perfect for it.
Finally, I finished up the puzzle I had been slowly working on. It had some tough sections and so it took me a while. Plus I was distracted with jewelry making.
Last shot, some of the jewelry I've been practicing on lately. 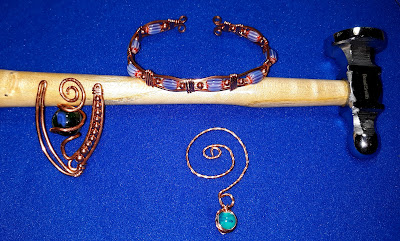 Well, that's it for this post. Thanks for dropping by.